A few weeks ago, Refuge and Rooted, our student ministry groups, held their Summer Camp against all odds!

The original camp was meant to be held in early June, but Student Life canceled their entire summer schedule, and then as time approached we wondered if we too would have to cancel as Covid-19 numbers began to spike in early July.

To top it all off, Hurricane Hannah made landfall the day before camp was supposed to begin! But the numbers held off and the storm veered west, thus allowing us five days of Beach Camp in Jamaica Beach, Galveston.

Four years ago, we discovered the Seaside Retreat Center in Jamaica Beach, and have utilized it for two fall retreats and two summer camps since. The Retreat Center is a gift of hospitality from Seaside Church, who built it about 5 years ago as a location for churches like us to host events.

These events have always resulted in student fun, community and spiritual growth, and this most recent camp was no different. Yes, we were chased off the beach by a daily thunderstorm, but all in all God used the week to develop our hearts for work in the Kingdom.

The theme of the week was, Kingdom Come. I don’t know if you have ever spent a focused time on discerning the whole meaning of that specific part of the Lord’s Prayer but that was exactly what the students did all week. We answered this question, What did Jesus mean when He asked for God’s kingdom to be here on earth as it is in heaven? The students spent thirty minutes twice a day on a Bible Study called, Kingdom Come, which tracked the character and purpose of God’s Kingdom on earth through the whole of scripture. After their self-study we spent thirty minutes discussing our conclusions and it was fun hearing how God worked in their time in scripture. This was an adult study meant to take 6 weeks! I was proud of these students hammering through it!

Of course camp wasn’t all study, we had fun out on the beach with the huge waves thanks to Hannah and held a sand castle building contest! We also were able to go on a one-hour dolphin boat tour and got to know Galveston with a city-wide scavenger hunt!

As you can see by these pictures the students had a lot of fun! Thank you for praying for this week and for our students! 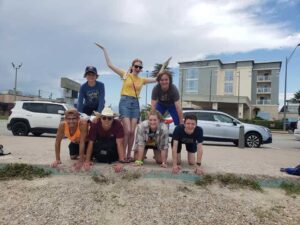 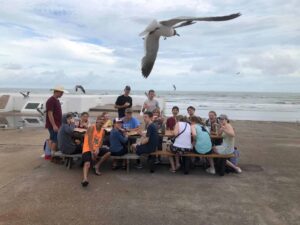 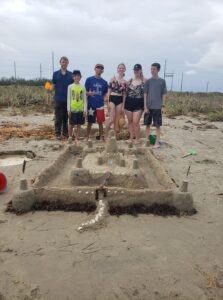 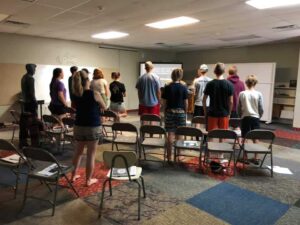